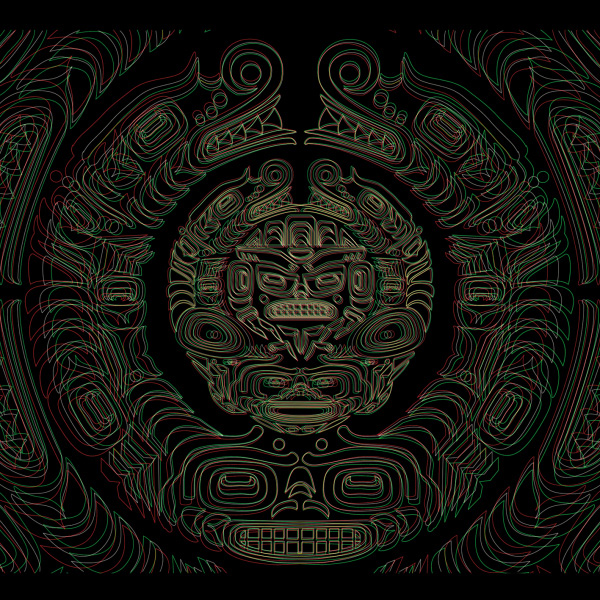 Ki was the intro to my theme, the idea of solitude and shadows. Quiet moments and threatening sentiments that kept trying to crescendo into something dark. Overtime, it crescendos… yet in the beginning of the record, it stops itself. There’s a ‘regulator’ on the intensity that holds the storm back in songs like Disruptr, Coast and Gato. Each time it takes itself to that point, it’s followed by an immediate retreat to the shadows. The point that it gets to in ‘Heavens End’ however, is the first moment that it ‘lets it out’ and it is followed by a sort of 70’s jam, almost like a regrouping. The lyrics in ‘Heavens End’ I found (to my surprise) were very against religion. Not against the sense of infinity or spiritual connection, definitely not atheist, but angry at organized religion. The cruelty and divisiveness of it. Seeing the environment and life from a sense of unity stemming from my experiences recently with different perspectives really made me surprise myself at how bitter I’d become towards it all. I have always been kind of ‘on the fence’ about religion, so when Ki finally let’s it rip on Heavens End, I found myself shocked that a lot of my anger was actually directed towards THAT as a theme. It was so typical, yet it seemed understandable… that anyone or any organization can claim ownership of the things that I’ve always felt profoundly attracted to, yet more than anything, just happy to be a part of, seemed the height of arrogance, and above all…exclusionary and really mean spirited. The experience made me realize during the process that ‘perhaps the anger within me is not directed at anything other than a misdirection of spiritual intensity’… people had been born and had died in my life, I had hurt my friends and band mates, I was confused, but it seemed that through the purging of this I was coming to some conclusions, and purging some baggage was necessary. Religion was first on the list. So Ki moves on, and when it finally gets to the song ‘Ki’ …it had a sort of epiphany. A sort of breakthrough of the first level, where the religious implications are gone, and the idea that what defines my humanity is more of an ‘I don’t know, but I’m happy to be here’ kind of frame of mind rather than a ‘life is lived through fear of punishment after death’ Ki included some great people in the recording, Notably drummer Duris Maxwell, Bassist Jean Savoie, Keyboards Dave Young and singer Che Aimee. The point of it was ‘personal accountability’.

We use cookies to ensure that we give you the best experience on our website. If you continue to use this site we will assume that you are happy with it.AcceptRead more